Just a few billion dollars more to go before we can claim the t-shirt.

That is just one of the several cliches that come to mind when reading a paper circulating NTM-A by Mr. Lester W. Grau.  Like “One Tribe at a Time,” Breaking Contact Without Leaving Chaos:  The Soviet Withdrawal from Afghanistan is an easy and enlightening “must read” for anyone that has any interest in the U.S. and NATO involvement in Afghanistan.

Even though we’ve been in Afghanistan longer than the Soviets, I still don’t think of us as occupiers.  I’m fairly certain Hamid Karzai is not ‘our man’, but the coalition does support his election (even if of questionable validity:  The Telegraph, The Washington Times, and CNN).  Regardless, I recognize the apparent duplicity of thinking that our presence here is something different than an occupation.

The Soviets trained, armed, and built an army;  We are training, arming, and building an army.

The Soviets built schools, hospitals, roads, and infrastructure; We are building. . . well, you get the idea.

I have no personal interest or affection for Afghanistan and think we are wasting billions of dollars and thousands of lives by being here.  But when we leave, I hope it doesn’t crumble into another civil war.

To paraphrase the movie Charlie Wilson’s War, I hope we don’t screw-up the end-game.

Just about anyone that uses a computer can relate to this Dilbert comic strip, but it is especially valid in the military where plagiarism isn’t just authorized–it is a survival skill:

A Canadian General Officer reported to NTM-A and rejected Powerpoint; he demanded that it not be used and didn’t want to see it.  Within a couple short weeks, the “2-maple leaf” had submitted to

the force and is now known as the creator of some of the worst powerpoint presentations!

After 30 days at NTM-A, anyone suffering a paper cut is qualified for the Powerpoint Ranger Tab.  Canadians don’t wear the tab, but a special exception is in order.

We really love to laugh at the Afghans for the funny things they do.  But they are, after all, dealing with the western standards we are trying to impose.

Even still, Americans provide the best entertainment.  While out on a mission recently, road status changed in the Kabul area forcing a group outside the wire to find an alternative way back to Camp Eggers.  The didn’t have a map and ended-up ‘off the beaten path.’  Making matters worse, they managed to locate the local waste water treatment plant — a roadside ditch.

Business as usual for the Afghans

The Afghans often use the ditches and roadsides for dumping their sewage and this was one of those ditches!  Unfortunately for the guys involved, they haven’t had the best sense of humor about the incident which has only ratcheted-up the amount of harassment they are receiving.  Such is life in the military; don’t wear your feelings on your sleeve!

If Afghanistan isn’t the armpit of the world, it is definitely not more than a ditch!

One problem–the proverb presupposes that there is a place to fish.  In Afghanistan, the biggest bodies of water are the evaporation lagoons of the westernized wastewater treatment plants and the irrigation ponds surrounding the ANA’s botanical gardens.

The photo at left appeared on the NTM-A website with the following caption:  “Afghan National Army soldiers unpack 70 Dell computers for use at the Regional Military Training Center Aug. 18. The ANA will use the computers to keep track of its supplies in [digital] form.”

Of what little I know about Afghans, this much is certain–“Afghan Right” is not computer-based.  What would Ghengis Khan or Attila the Hun have done with a computer?  So the obvious joy on the soldiers’ faces says one thing to me–PAYDAY (or Fantasy Fishing)!

Don’t be surprised if the billions of dollars of boats and tackle end up in the next Bassmaster tournament on ESPN.

From the media attention, you would have thought Kabul was about to fall on September 13th.  Things were interesting for a few hours–then it rained.  I guess the Taliban lost interest in fighting after that.

Regarding the rain, it was probably the hardest rain in the last six months.  It has maybe rained on only four or five days during that timespan as well.  I’m sure the Taliban weren’t prepared for that.

The Fog of War

It’s always wonderful when an illustration truly clarifies organizational structures and processes.  Unfortunately, that is not the case with the ANA logistics system.  Instead, this looks more like a Family Circus comic strip. 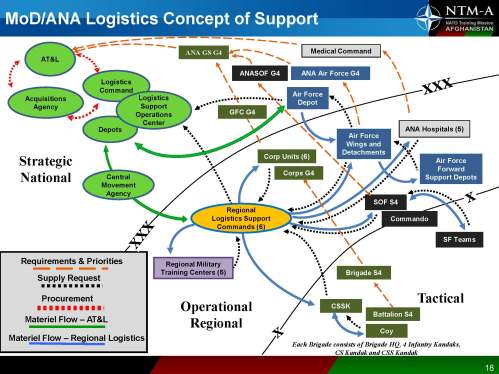 If this truly does illustrate the functionality of the ANA logistics system, the good news is that the Taliban can’t figure it out either.

John 15:13, “Greater love hath no man than this, that a man lay down his life for his friends.”

Donkeys are extremely valuable in the remote areas of Afghanistan and are even common on the streets of Kabul.  Being so common, it only makes sense that terrorists would think they can launch attacks with these animals against unsuspecting targets.

For some ANSF projects, donkeys and horses are the primary source of transport for construction materials

Here is a war story you won’t likely find on Oliver North’s show:  The Tale of the Donkey-Borne IED.  Like any war story, documentation is often sketchy and the teller’s enthusiasm often over-the-top.  However, knowing what Afghans do to man’s highly-trained best friend, it isn’t to surprising that this beast of burden would be asked to give the ultimate sacrifice.

Proverbs 12:10, “A righteous man regardeth the life of his beast: but the tender mercies of the wicked are cruel.”