In a sense, it’s what we do

ISAF has huge challenge building the Afghan National Security Forces (ANSF) while fighting a war, a COIN operation, navigating corruption, and a drug trade.  Complicating matters is that this is being done with a coalition of about 40 countries.  To quote an NTM-A alum:

An American Air Force Officer designs an Army unit that is trained by a British Armor Officer, validated with Canadian and Jordanian Officers, and later mentored in the field by Turkish Officers.

It could also be added that each of the people listed above change-out every six months so forget anyone knowing what the previous people were thinking!

This EDS commercial pretty much summarizes the task IJC and NTM-A have undertaken:

There are a few improvements that will make this commercial a truly authentic metaphor for NTM-A:

In a sense, that’s EXACTLY what we do. 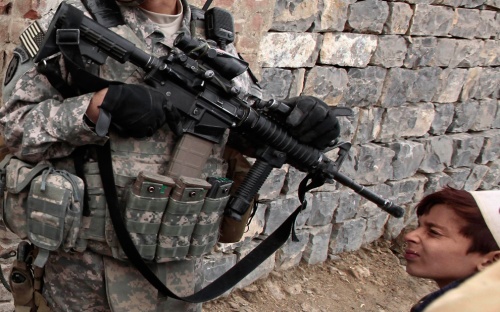 Wait until the Marines find out about this.

It’s all fun and games until someone loses an eye!

Can’t teach Afghans to fish without a fishery

“There you go again.” –Ronald Reagan

Volumes will be written in the coming years documenting the waste in Afghanistan.  The examples continue in the Wall Street Journal report, At U.S. Base, Afghan Endgame Begins.

On a recent trip outside the wire, I saw fish hanging in a Kabul shopkeeper’s window and wondered where the fish could have come from.  In a previous post, I wrongly assumed that there was no place to fish.  I simply underestimated our desire to teach them to fish!

The [172nd Infantry] brigade command has axed those [projects] deemed too complicated and time-consuming, such as building a fish hatchery.  Instead, it is trying to get some roads paved.

A fish hatchery?  In a desert?  How long did it take the brigade to determine a fishery was too complicated and time-consuming?  Maybe saner minds will prevail over slaughterhouses, media centers, and countless other good ideas.

When you are hitting yourself in the head with a hammer, it feels so good when you stop.

The fate of U.S.-provided power generators at FOB Sharana encapsulates U.S. concerns about whether Afghan forces will be able to hold their ground after the foreigners leave.

The generators often break because the Afghan operators haven’t learned to turn them on properly and keep overloading them, said engineers of the 172nd brigade. The engineers figured they have replaced at least 25 generators given to the Afghan forces since July, at a cost of $400,000 each.

“We’ve taught them the steps to turn it on, but it hasn’t stuck, and the generators, air conditioners, all of that will break,” said Capt. Mike Merseburg.

“The answer for them has always been,’Well, give me a new one,'” said another engineer, Capt. Adrian Sanchez. “But what’s the point if they can’t sustain it?”

Not sure what is worse, replacing generator after generator and expecting the Afghans to start taking care of them or supplying firewood by helicopter.  Maybe we aren’t so interested in teaching them to fish–but we should at least try to stop hitting ourselves with the hammer.

The Ballad of Bin Laden

Mixing religion, politics, and engineers in one motion, below is some Afghanistan-related engineer humor for which I make no excuse if you find it less than funny:

Which way do you face, with your mug in a book?
Where do you look, when you sit in a nook?
Is it easier or harder to adjust the seat,
or turn the foundation, when you pour concrete?
Or do you not care and just say, “oh, hecka,”
when you consider direction and ponder of Mecca?

When muslims do their business, they cannot face or have their back to Mecca.  So the facilities built in Afghanistan must have the toilets oriented such that they can be used without violating this tenent.  The Afghans will absolutely not use the facility if this is not correct.

NTM-A or IJC did install an LSS (Life Support System–toilets and showers prefabricated in a connex) near Kabul International Airport with the toilets oriented improperly (which could have been fairly easily fixed by just rotating the connex’s 90 degrees) and remain untouched to date.

The below drawing submission reflects an engineered evaluation of the direction to Mecca from the jobsite and the recommended solution.

The challenging decisions engineers must make. . .

I wonder if the up-armored Humvee ‘porta-potties’ were oriented properly. . .

RTE Red is BLACK from RTE Maroon to RTE Green until further notice.

With instructions like these, no wonder we keep the insurgents confused.  It also has the added benefit of keeping the officers busy. . .

From the “American’s provide the best entertainment” stack, comes this latest story from Afghanistan.  Inside an email chain researching the Afghan National Army’s supply system:

Here is something interesting.  So today I tried to fly two boxes of firewood out to a [location] for an ANA company that is displaced.  I was told not to do that because the ANA and AUP have a contract / agreement to obtain firewood on the economy locally.  Someone has to answer this riddle. . . we’ll find it.

This is reminiscent of some other, equally inconceivable, ideas:

This, of course, is from Joseph Heller’s, “Catch-22.”  Milo Minderbinder is starting to look pretty sane and Yossarian is indeed crazy.

How can you tell when a politician is lying?

Instead, Sentator Blumenthal’s first tour in a combat zone was his boondoggle to Pakistan and Afghanistan this week (it is his first trip as Senator, not sure if he ever tried the political gesture before).

Prior to a flight from North KAIA in Kabul, I was attending a meeting at the ISAF Joint Command (IJC) on the same base.  Just before entering the IJC compound, a friend and I positively identified Senator Blumenthal exiting the compound.  While we were certain this was the Senator (the size of the entourage was one give away), his visit to the theater was confirmed by a quick online search.  The trip will undoubtedly prove beneficial when, like every other politician, he uses the trip to trumpet his concern for the troops and expertise in foreign affairs.

Whether this actually qualifies as a combat tour is still under debate.  In one of his first acts as president in 2009, President Obama officially renamed the “Global War on Terror” the “Overseas Contingency Operation.”